I saw this post from Stephen Hurley on April 24th. We are not there yet, but he is right to put this out. In the midst of the first truly global crisis many of us have ever seen it is right to start asking some really hard questions. Are we ready to do this?

This is a hard thing to do. Today I am reading articles in the New York Times where they are doing a great job of creating a record of some of the nightmares that are happening in the United Staes right now.

Gladys Vega, a longtime community activist, helped a man who had been banished to a freezing, unfinished dirt basement, where he was riding out the illness on a piece of cardboard. Another man had been sent to sleep on a porch, despite temperatures that still dropped below freezing at night.

“People are being treated as if they have leprosy,” said Ms. Vega, executive director of the Chelsea Collaborative.

New York Times Sunday, April 26th, 2020 – In a Crowded City, Leaders Struggle to Separate the Sick From the Well 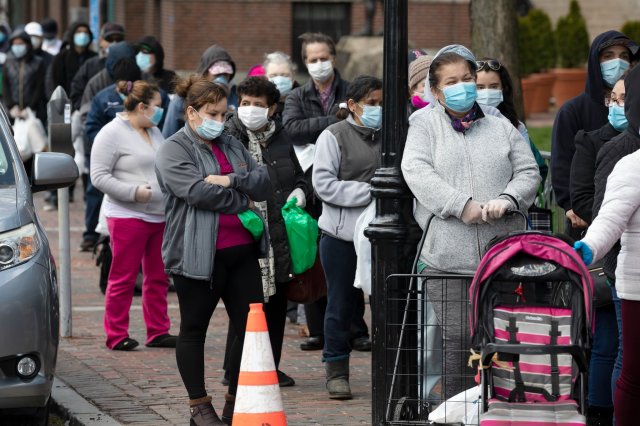 This is what we need to be doing right now. We need to read the stories. We can’t become too isolated. Our social infrastructure is so broken that those who live in poverty, those without what should be the necessary resources are dying terrible deaths.

While the situation here in Canada is better, at least for now, medical workers are doing incredibly heroic service in a system that was already at over 100% capacity before the crisis hit. It is a marvel that they are able to do this. We can’t ever forget this.

We are scrambling in other areas as well. As many post pictures of their latest bread creation, teachers are struggling to connect to students who, in many cases, do not have the resources to learn from home. How many educators are spending sleepless nights worrying about their students?

While we have known for years that hard to serve communities needed to have computers and internet services to effectively link to their schools we did nothing about this. We didn’t provide computers for home use, we didn’t think that was something that schools were supposed to do. We were woefully underprepared for a crisis like this.

Those with the resources can surf through a crisis like this. Those without are suffering in silence.

So how do we start asking the hard questions?

Do we really ever look at how we distribute our resources in a rich country like Canada? Are we willing to be really critical about the level of health care services that we make available to every person here in this country? Are we really willing to offer excellent support, the support that is needed in low-income communities? Do we really want to support those who do not have a voice in our communities?

It is too easy to condemn our neighbours to the south. We love to congratulate ourselves saying that things are so much better here. Is this true?

Is a vital social infrastructure really our first priority? When we see the gaps what do we do? Where do we put our resources? Why do we allow so much inequality to exist?

These are the questions I would like to put out there now. After the Second World War, the world really changed in significant ways. We started to realize the importance of new institutions like the United Nations, and the importance of seeing ourselves as global citizens. Poverty and ignorance caused the war so we had to find ways to combat these evils.

Our world changed. Will it change now? Or, will we just go back to Major League Baseball and let all this slide?

The death toll is already staggering. Just as after the war, we need to mourn the terrible loss, but we need to do so much more. Can we make the incredible effort once again to really change how we all live and how we look after our most vulnerable?

I am a cynic. I don’t know if we really learn from a crisis. I think people just want to make sure they can get their hair cut again. I don’t see the big questions being asked.

I really hope I am wrong, but can we actually make the incredible changes that need to be undertaken?

I would love to be wrong on this one.

One thought on “Covid Journal # 2 – Asking the Right Questions”

University of Ottawa Faculty of Education